“The most important
aspect of art in the
movement is that art
feeds the soul.”

The Art Build Workers (ABW) are a group of six artists, designers, photographers and educators who are based in Milwaukee, WI. We work locally and travel around the country organizing multi-day art builds that help unions, organizations and movements amplify their messages through visual art, media, and archiving. Our motto is that before the march and before the strike there is the art build. We primarily collaborate with the National Education Association (NEA) that is the largest union in the country with an estimated membership of over 2.7 million members. ABW designs graphics for the movement and also coordinates designs from a vast network of activist artists and designers from around the country that we know. We screenprint picket signs, paint parachutes and banners, and produce offset posters that change the way demonstrations look visually, while amplifying a movements social media presence, and helping create a space for movements to build community and to become stronger.

April 2020, Milwaukee: We will be working with Voces de la Frontera and VDLA on the May Day art build 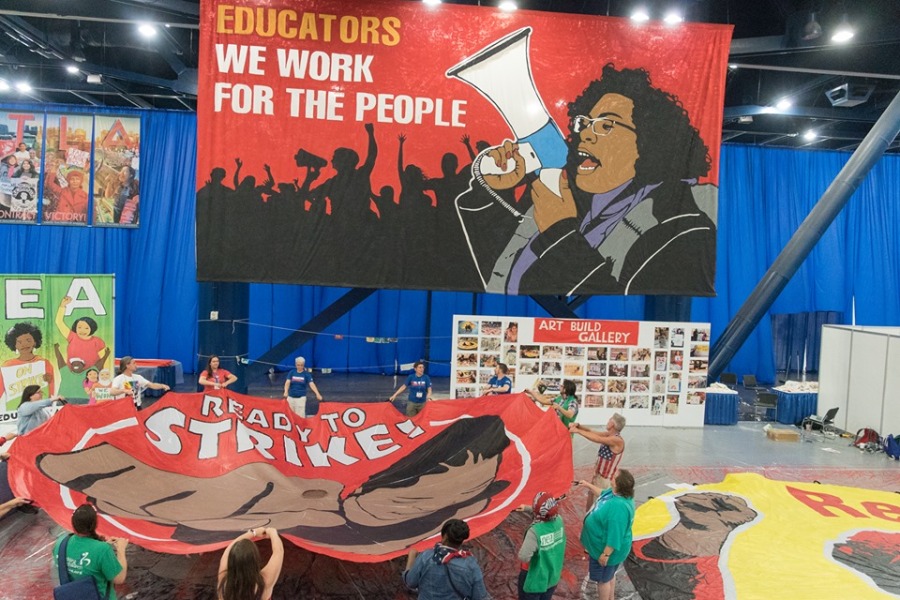 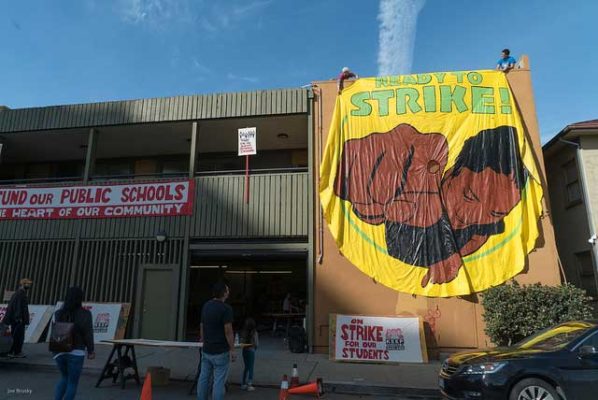 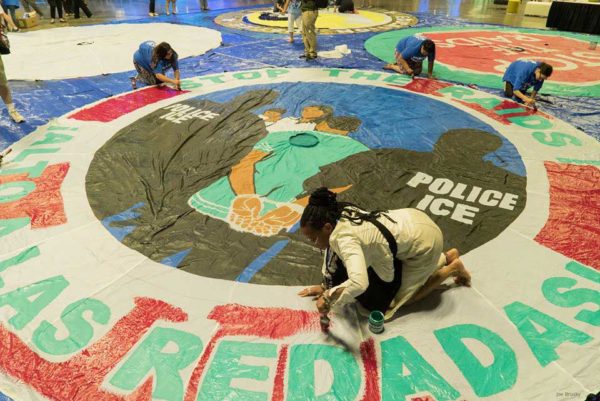 Wyoming art teacher Paige Gustafson found her happy place at the 2019 NEA Representative Assembly (RA) in the delegate experience area, where paintbrush in hand and dozens of cups of paints around her, she put the final daubs on a fabric panel saying “Fund Public Education.”

“I love it. I feel like, especially as an elementary art teacher, we’re often forgotten, and art is so incredibly important,” said Gustafson, who plans to eventually sew her panel to the back of her RA delegate vest. “Creating images that go along with a movement, whether it’s racial or social justice [or the national #RedforEd movement], brings people together, and creates ownership in the movement.”

Hundreds of RA delegates visited the area on Thursday, where artists from the Milwaukee-based Art Build Workers are helping them create and contribute to graphic depictions of collective action. While massive parachutes are turned into protest banners that say, “Ready to Strike” and “Red for Ed,” small muslin patches screen-printed with slogans like, “Teachers—We Work for The People” and “Public Schools—The Heart of Our Community,” are painted by delegates who can take them back to their classrooms and communities.

The “art build” at the RA—which is available to delegates through Saturday—is the latest in a line of art builds across the country, organized jointly by Art Build Workers and local unions, such as the United Teachers of Los Angeles, California’s Oakland Education Association, and the Prince George’s County Education Association in Maryland. The way it works is that the professional artists associated with Art Build Workers first talk to union leaders and community members about the needs of their community, brainstorming slogans and images, and then they work with local educators, parents, students and others to create the art that amplifies their message and goals.

Roxana Dueñas is the face of the Los Angeles teachers’ strike. Her image is plastered on billboards, classroom walls and the United Teachers Los Angeles website. It graced a full-page advertisement published earlier this month in the Los Angeles Times, which sometimes shows up on the paper’s website.

The history and ethnic studies teacher is pictured head-on, her face framed by large glasses, her dark hair parted to one side. She looks confident, determined. She tells people to “Stand with L.A. teachers.”

The poster of Dueñas, 34, who teaches at the Math, Science, and Technology Magnet Academy at Roosevelt High School in Boyle Heights, is one of several commissioned by UTLA and done by local artists last month. With the strike entering its fourth day, Dueñas has embraced her role as one of its most visible symbols, while she joins her colleagues on the picket line.

“When you see it you think, ‘Wow, this is important work,’” she said of the poster. “A lot of teachers’ work is done behind closed doors — it’s not a public performance. It feels nice to be seen.”

The poster was crafted by Ernesto Yerena, who also lives in Boyle Heights and was one of the artists involved in the “We the people” protest art campaign in January 2017 ahead of President Trump’s inauguration. That campaign was led by artist Shepard Fairey, who designed Barack Obama’s iconic red, white and blue “Hope” poster, and variations featuring Latina, Muslim and African American women.

Yerena remembered how effective Fairey’s portraits were and decided his UTLA poster would be a nod to “We the people.” He and Dueñas have mutual friends and share similar values. He had spoken to her students on a couple of occasions in recent years.

Dueñas spent less than an hour in Yerena’s studio, posing for portrait photos, some with a raised fist. He let her choose the winning photo and submitted the final work to UTLA for approval a couple days later.

“I know how damaging education can be for young brown kids if it’s not used to empower us,” he said. “Roxana is one of those teachers that teaches kids to become critical thinkers.”

“For strikes,” explains arts organizer Joe Brusly, “my role is to just capture moments and share stories that help sustain those on the line. The beauty is, the art created in the hands of those picketing tells so much of the story on their own.” (Photo: Brooke Anderson Photography)

“Culture is a space where we can introduce ideas, attach emotions to concrete change and win enthusiasm for our values. Art is where we can change the narrative, because it’s where people can imagine what change looks and feels like.”
—Favianna Rodriguez, one of the artist’s contributing artwork to the Oakland teachers strike.

For the last two months a massive #strike-ready art-making collaboration between the Oakland Education Association, local artists and a team of arts organizers has been building momentum, participation and created thousands of pieces of hand made art that has been used in public actions leading up to the strike and will be seen on the picket lines.

Joe together with a team of artist-organizers from Milwaukee (Kim Cosier, Nicolas Lampert, Paul Kjelland, Claudio Martinez, and Josie Osborne) started this model of ambitious large scale art builds for teachers unions. They went on to co-organize the art builds in Los Angeles and Oakland, where I was the local arts organizer working with Oakland teachers. Joe, a photo journalist, was the UTLA teachers union official photographer for the LA Strike, both documenting and pushing out images and stories on social media like Facebook, Instagram and Twitter. Lu Aya of the Peace Poets worked with teachers to write and train each other on strike songs.

On a typically warm and sunny Saturday last week in Venice, California, Kristie Mitchell sat outside at a table surrounded by Sharpies and a pile of posters. Each one featured the same basic illustration – an outline of an African-American woman and three school-age children with the words “I Stand For” across the top. It was up to Mitchell and the other public school parents and children around the table to decorate the poster with whatever color or flourishes they preferred, but also to include what they believe their school needs the most.

Mitchell had already created two posters – one declared “I Stand For School Nurses Five Days a Week,” the second, “I Stand for Smaller Classes” – and was busy working on a third.

“We need to give teachers a stronger voice,” Mitchell said. “They don’t have the resources to teach our kids. Everybody in the community should help give them more power. When we get together like we are today, that’s what we are doing.”

Mitchell was just one of the many parents who joined hundreds of educators, students, artists, activists and who converged on a three-day community Art Build hosted by United Teachers Los Angeles (UTLA) to create protest art supporting public education. The event was held at the Social and Public Art Resource Center (SPARC), a popular community arts center housed in an old art deco building that until the mid-1970s was the Venice Police Station.

A few feet in front of Mitchell at a longer table, a row of educators, parents and students were dipping into tins of black and orange paint to decorate a large banner adorned with the proclamation “Fight For the Schools LA Students Deserve.”

A little further away, a few students had begun applying the first layers of color to four 24-foot parachute banners that cloaked the  outdoor parking lot. At the studio inside, artists were churning out silk screen picket signs with messages denouncing school privatization and corporate greed and championing smaller class sizes and solidarity with educators.

Organizers in Milwaukee wanted to prepare a strong campaign to show the grassroots support for public education as the budget cycle approached. Joe Brusky, an educator on release to help the Milwaukee Teachers’ Education Association organize, decided to incorporate an Art Build into the efforts.

Drawing on his experience documenting the Art Build for the Climate March in New York and from previous efforts in Milwaukee, Joe organized with art educators, artists and community members with amazing results.

“In Milwaukee the people who took part in the Art Build were activists who I often saw in our advocacy work, but also a lot of new people that I hadn’t seen before who were just looking for an entry point into the union, something comfortable to get involved in,” said Joe. “Leaving, people were energized.”

The success of the Art Build in Wisconsin inspired the Minneapolis and St. Paul Federations of Teachers to add this to their organizing efforts.  The organizers worked with the Wisconsin team to implement their successful model.

“In Milwaukee we saw an incredible coming together of teachers, students and community members to produce something positive.  Educators are under attack and have been for decades and to have the opportunity to come together and build something and see it in use and do it in a communal and positive manner was amazing,” said Nate Gunderson, NEA organizer.

Both the Art Build in Milwaukee and in Minneapolis and St. Paul have seen their art put to use in the advocacy efforts.  These events have also resulted in higher levels of participation and new faces in the movement.

“We had over 200 people at our Art Build and three quarters of them were new people who had never walked through the door of the union hall before.  Our community got to express what was going on and the networking, collaboration, communication and friendship forged that weekend were really powerful. We have seen those same people coming back and taking action,” said Joe.

“I believe there was a clear before and after about how we think of ourselves and how other people think of us after hosting our Art Build. This event helped us redefine our union away from service based unionism and towards organizing-based unionism. Engaging in this positive, communal and beautiful work was definitely transformative. I highly encourage other unions to hold a similar event,” said Michelle Wiese, President, Minneapolis Federation of Teachers 59.